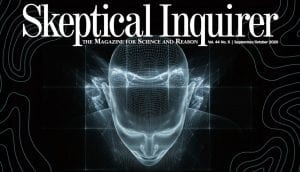 In our hyperpolarized, hyperpartisan era, perhaps the hardest thing to do is to admit we might be wrong. Baseless, unscientific beliefs are routinely expressed with absolute certainty, and for advocates of science and reason it is tempting to confront false claims with equal conviction, or even contemptuous dismissal. But in the latest issue of Skeptical Inquirer, researchers advance what they believe to be a more effective “guiding credo” for skepticism: the embrace of intellectual humility.

“Intellectually humble individuals habitually reflect on their thinking processes, applying the principles of skepticism to their own reasoning,” write a team of scholars led by Emory University psychology professor Scott O. Lilienfeld. Their research shows that intellectual humility helps inoculate one from things like confirmation bias, conspiracy theories, and falling for “pseudoprofound BS” stuffed with scientific-sounding jargon.

The capacity to admit the possibility of error is a virtue that has been championed by skeptic heroes, including Charles Darwin, Carl Sagan, and Paul Kurtz. “In many respects, we can think of science as an organized prescription for intellectual humility,” write the authors, wisely concluding, “But of course, we might be wrong.”

Also in the September/October issue of Skeptical Inquirer:

And much more. Skeptical Inquirer is available in both print and digital subscriptions.

This site uses Akismet to reduce spam. Learn how your comment data is processed.

RECEIVE EMAILS FROM US

Registration is required: https://bit.ly/2CDCshQ Center for Inquiry is proud to present CFI Insider, a new monthly web series highlighting the work an...

Sorry to disappoint you, but CV19 and social distancing ... has placed this popular activity on hold until we return to "normal". Thank unions for wee...

Three events today. See below. Due to CV-19, any virtual events will be listed here: http://bit.ly/2DtFDUvCFI Tampa Bay supports education, and TBTC i...

Sorry to disappoint you, but CV19 and social distancing ... has placed this popular activity on hold until we return to "normal". Thank unions for wee...